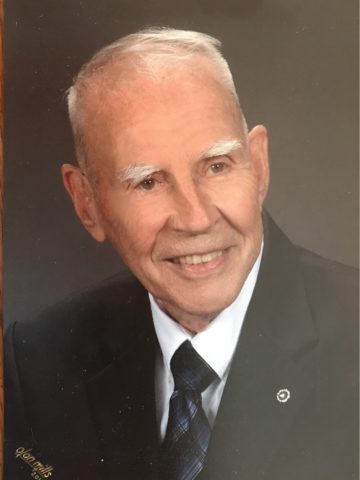 Departed on May 3, 2019 and resided in Hendersonville, TN

Ernest McGlawn Leopard of Hendersonville, TN. passed away at 93 years of age on May 3rd, 2019.

Ernest was born in Athens, Alabama on November 10th, 1925 to Charles and Ruth Hunter Leopard. He grew up on a cotton farm near Athens and though he moved away, he always kept that farm in his mind and heart. At an early age, he enlisted in the Navy and served his country in WWII. After being honorably discharged he earned his Bachelors degree in Business Administration from Athens College.

Ernest met his wife, Faye, at a basketball game between Athens College and Martin College in Tennessee. The introduction was eventful, as he collided with her during intermission causing her to fall. You could say he ‘knocked her off her feet’. Faye Shepherd became his wife on August 31st, 1951 and they were married for 67 years. He began his career at Colonial Finance; then worked for the State of Tennessee where he developed the Tennessee Consolidated Retirement system. He transferred to the Tennessee Department of Health where he worked until his retirement. Ernest and Faye spent many years traveling the world, including China, Europe, The Holy Land and almost every American state.

A devoted Christian, Ernest was a member of the Hendersonville United Methodist Church. He had many hobbies and passions that included wood working, carpentry and reading the bible. He added a den to their house on Diane Drive, built a barn on the property, refinished furniture and built many a bird house. He loved to fish and was a devoted Alabama Crimson Tide fan. He was a 32nd Degree Mason and member of Old Hickory Masonic Lodge #598 F&AM. Ernest was also a member of Gideons International and taught the men’s Bible class at City Road Chapel United Methodist Church for over 25 years.

Ernest is preceded in death by his parents, Charles Edward & Ruth Hunter Leopard, and two brothers; Charles Edward Leopard III, & John David Leopard. He is survived by his beloved wife Faye and his two children, Laura and Nathan.

A Memorial Service will be held for Mr. Leopard on Saturday, May 11th at 11:00 AM in the Chapel of Hendersonville Funeral Home with Dr. Randy Goodman officiating. The family will be receiving visitors prior to the service from 9:00 AM until 11:00 AM.