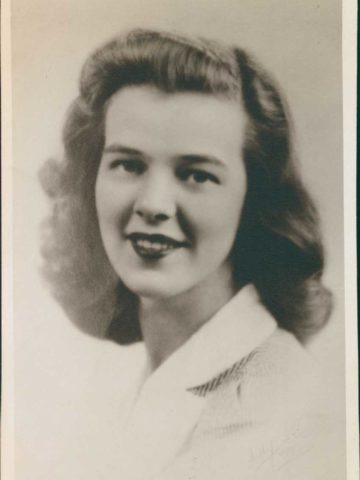 Departed on December 31, 2018 and resided in Hendersonville, TN

Frances Elizabeth (Lib) Spencer Mayberry, age 95, of Hendersonville, TN, went peacefully to her heavenly home on December 31, 2018. She was born in Gastonia, NC on August 10, 1923, to the late Charles Lewis Spencer, Sr. and Nany Jane Pearson. In addition to her parents, she is preceded in death by her three brothers, Lamar Spencer, Charles Spencer, Jr. and Don Spencer, and her son- in- law, Rick Hutton, and husband of her granddaughter, Tony Rawls.

Lib was married to Bob Mayberry, originally of Edwardsville, IL for 23 years and together they had three children, Dan (Valerie) Mayberry, Nancy Mayberry and Janet (Rick) Hutton. She is a grandmother to seven and great grandmother to 22 children.

She had a life-long love of music and was an accomplished pianist, teaching lessons in her home for over ten years and playing the piano and organ in every church she attended from the time she was in her teens. She also co-wrote and composed two Christian songs. She loved the Lord and faithfully served Him, the last 52 years as a member of First Baptist Church, Hendersonville, where she taught Sunday School, sang in the choir, played the piano/organ and helped start the 24-hour Prayer Ministry that has ministered to thousands of people.

For much of her life, she was an avid Bridge player and loved working Thomas Kincaid jigsaw puzzles. She always had one out to work for anyone who visited her. Nothing gave her more joy than being with her family and her faithful furry companion, Cody, who was always by her side. She was a very loving mother and grandmother and showed that love by cooking wonderful meals every Sunday for many years, spending time and having a fierce commitment to pray for each one every day.

A life celebration will be held at 2 pm, Saturday, January 5, 2019 in the chapel of Hendersonville Funeral Home. Family will receive friends from 11am-2pm prior to the service with burial in Hendersonville Memory Gardens. Chad Hutton, her grandson, will officiate the service. The pallbearers who will be honoring her are Dan Mayberry, Mark Mayberry, Chad Hutton, James Rawls, Kevin Albright and Richard Coomes.

Her family would like to thank those who cared for her at Park Place for so many years, especially Kevin, who went over and above what was expected and gave generously the utmost of care to the very end of her life.

Her life and love will be greatly missed by her family and all who loved her.

In lieu of flowers, please send a donation to:
City of Refuge Church
117 Pilot Knob Lane
Hendersonville, TN 37075
or make them Online at
www.cityofrefugetn.org