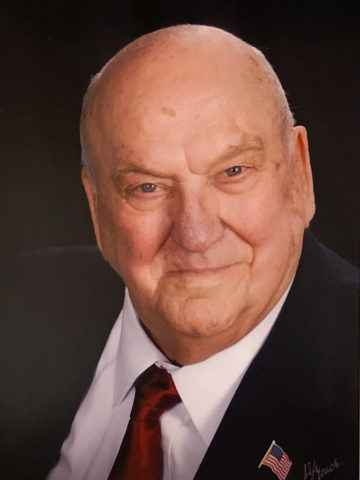 Frank Edward Wallace, 91, of Hendersonville, Tennessee, passed away in his sleep on August 3, 2018 at NHC Place Sumner in Gallatin, Tennessee.

Born in Dunmore, Pennsylvania on March 15, 1927, he was the son of the late Frank and Susan Speshok Wallace.

He was preceded in death by his first wife, Mabel Carl Wallace; his sister Pauline Wegrzyn; and his brother, John Wallace.

Frank is survived by his wife Martha Anderson Wallace; his children Kathy Wallace, Janet Ulm, and Steve Ulm; and many loving grandchildren, nieces, nephews and extended family. Frank was a loving father, husband, uncle, great uncle, grandfather and friend to all.

Frank joined the Navy during World War II, when he was only 17 years old and still in his Senior year of high school. He joined the US State Department Foreign Service in 1948. His first post was in Sofia, Bulgaria as a civilian embassy guard. While there, he met his first wife Mabel Carl Wallace, of Nashville, and they were married in Rome, Italy. He served many places overseas, including Paris, London, Budapest, Athens, Washington, D.C., Saudi Arabia, Burma and Nigeria.

He retired to his home in Hendersonville in 1975 at age 50. Frank enjoyed working with his hands so much that he started his own business restoring and selling antique light fixtures. He was blessed to meet “the love of his life,” Martha Anderson, at age 69. Together, they were a blessing to their family, friends and anyone who met them.

A special thank you to family and friends who provided so much loving care and support during Frank’s illness. A grateful thank you to The Health Center at Richland Place in Nashville and NHC Place Sumner in Gallatin for their gentle and compassionate care. Also thank you to Hendersonville Memorial Gardens Funeral Home for all the arrangements.

The family will receive friends from 1:00 – 2:30 p.m. Wednesday, August 8, 2018 at Hendersonville First United Methodist Church.  Celebration of Life service will follow at the church at 2:30 p.m. with Brother Randy Goodman officiating. Following the funeral, Frank will be laid to rest in the Garden of the Cross at Hendersonville Memory Gardens.