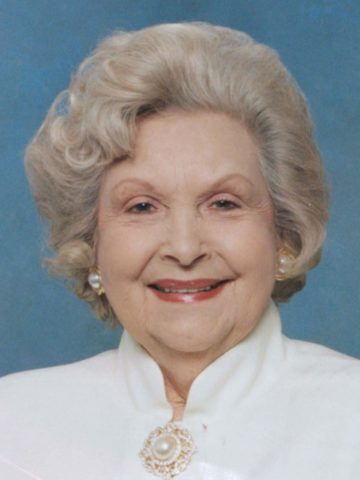 Departed on November 5, 2019 and resided in Gallatin, TN

Micki Brooks Thompson age 94 of Gallatin, TN passed away on Tuesday, November 5th 2019. The family will receive visitors at the funeral home on Friday November 8th from 11:00AM until service time at 1:00PM. Funeral Services for Ms. Thompson will be held on Friday November 8th, 2019 at 1:00PM in the Chapel of Hendersonville Funeral Home with interment to follow in Hendersonville Memory Gardens. Jay Edgerton will be officiating the service. Pallbearers include: Allen Coker, Danny Williams, Mickey Ponder, Bill Webster, Trey Brooks & Tommy Jarrett.

Micki is preceded in death by her parents William & Beulah Greene, daughter Nancy Dale Robinson, son Will Day Brooks, II, and 3 of her siblings.
Micki was born in Cramerton, NC, on August 5, 1925. She grew up in North Carolina and attended schools in NC, TN, and CA.

In November 1947, Micki and her two-year old daughter, Nancy, traveled to Tehran, Iran, with her husband, Joseph Phelps Greer, who was selected to serve with the USAF Air Attache’. She lived in Tehran until her husband was killed on a CIA mission plane crash on February 6, 1947. Their son, William Richard Greer, was born two days later.

Upon returning to the U.S., she resided in Washington, D.C., where she held a position at the Pentagon as an executive secretary for the USAF. In 1951 she moved to Gallatin, TN, and married Monroe Brooks. They had two sons, Will Day Brooks, II, and Monroe Massey Brooks, Jr.

In 1969 she became director of Public Relations for the ABC Johnny Cash Television Show and held that position for the two years the show aired. Micki then moved to California, married John Thompson, and was the Executive Vice-President of Plantation Productions, Inc., a self-owned company located in Hollywood, CA. The company made numerous movies and country music specials for television.

After retiring from Plantation Productions, Inc., in 1989, she moved to Beaufort, SC, to be near her daughter, Nancy Dale Brooks Robinson, and remained there for 16 years. Recently she returned home to Gallatin, TN, to enjoy her two sons and life-time true friends.

Micki was a loving mother, grandmother, sister and friend to all. She will be greatly missed by all of those who knew and loved her.