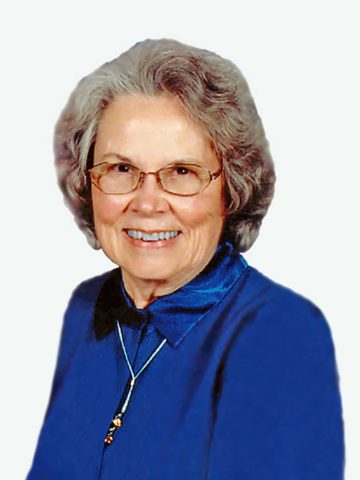 Departed on February 17, 2021 and resided in Hendersonville, Tennessee

Mrs. Minnie Olavee Blackshear Carter, age 83, of Hendersonville, TN went to be with her Lord and Savior on Wednesday, February 17, 2021.
She was born on January 28, 1938 in Tullos, LA. Her Mother died when she was only 5 days old, so she was raised by her uncle & aunt as the “oldest sister” to their children.
She was known to her family and friends only as Olavee. When she began school, her Father added Minnie as her first name on the needed birth certificate. Later, she chose to use Minnie whenever she was at work.
For decades, she was a dedicated and caring RN to all her patients. She began her career at Jefferson Davis Hospital in Natchez, MS. She found great joy in being with her senior patients. She was an excellent Director of Nurses at Heritage Manor Nursing Home in Ferriday, LA prior to moving to TN. She retired after many years as an RN at NHC HealthCare-Hendersonville.
After retiring, she and her husband, James Lee, hit the road at every opportunity going near and far in the US and Canada with the Good Sam Club and 3 Ls RV Club. Sometimes they took along their beloved dog or cats. They also took several cruise ship trips to various islands.

She flew with her daughter, Joyce on a visit to NYC. She was a cross-country bus chaperone for her granddaughter, Jill’s class trip to Washington, DC and much later, she was her chaperone in Thailand.
She enjoyed many fun decades with her Red Hat Society and Happy Face FCE Club friends. She was a gifted artist and sharpened her skills by taking painting classes. She had a beautiful handwriting and wrote poems. She enjoyed crafts, sewing, crossword puzzles, puzzles and collecting angels & porcelain dolls. She loved being outdoors and spent many hours tending her yard.
Church was always a big part of her life, especially once she became a Christian as a teenager. At Ridgecrest Baptist Church in Ridgecrest, LA, she was very active including serving as a children’s teacher, playing handbells and singing in the choir. As long-time members, she and her husband joined with others from First Baptist Church-Hendersonville on an Alaskan mission trip.
Caring for and loving others was always a priority for her. She spent hours phoning relatives and friends. She loved attending family reunions, cousin campouts, weddings, birthdays, anniversaries and funerals.
For several years, her mother-in-law, Lucille Gordon Carter spent months living with her family during the early years of Alzheimer’s. She also cared for her step-mother with dementia during her final months. In recent years, Olavee was diagnosed with Alzheimer’s herself.

No visitation or funeral service is planned due to the covid-19 pandemic. Burial will be in New Union Baptist Cemetery in Tullos, LA.
Memorials may be made to the Alzheimer’s Association or her brother-in-law’s church- Hosanna Baptist Church in Ball, LA.
We will always carry your memory in our hearts.